A short stroll from the heart of picturesque downtown Paris, the Little Paris Bread Co is tucked into an historic brick building, its striped awning and – weather permitting – its punchy yellow patio sets out front offering a playful nod to European bistros. The warm and comforting vibe of the shop is airy and nostalgic, instantly, I want to say, taking me back to my grandmother’s farmhouse kitchen. Then again, this is definitely not my grandmother’s kitchen. Front and centre is a mod curved bar. Behind it, retro floral curtains skirt a counter that is absolutely packed with tantalizing sticky, gold pastries. On the back wall above the counter, crusty loaves are piled high on wooden dowels in a compelling geometric pattern that allows each loaf its own solo performance.

Dominating the opposite wall is a handsome roll-up garage door through which I can see a display of a dozen vintage racing motorcycles in the neighbouring business’ sprawling, agreeable, open-concept work space.

Little Paris owner April Vande Leygraaf and her all-women team (aptly named ‘The Ladies Who Loaf’) have been working exclusively with sourdough for several years. I don’t need to remind anyone that when the bakery opened its doors in September 2020, sourdough was undoubtedly having a moment. In fact, if you’re like me, you probably tried your hand at a starter last March and, quickly deciding that some things are best left to the experts, opted for a less time-intensive form of self- expression – like adopting a dog. While many of us shoved our little jars of gloopy starter into the back of our fridges, our appetite for fermented fare continued to grow – just in time for these ladies to set up shop.

The journey of April’s bakery mirrors her craft: the product of what began simply as a creative outlet was, at first, shared only with family and friends. Word spread and, before long, her exquisite sourdough products were embraced by fans and followers who were soon able to find her loaves in coffee shops and fromageries around the region. In fact, in the months leading up to the shop’s grand opening, folks had been lining up at April’s home to get their hands on a loaf.

April credits her decidedly memorable, successful first year to the surge of daytrippers and newcomer ‘Parisians’ in search of a handcrafted experience. And with an Instagram-worthy location, a from-scratch modus operandi, scrumptious treats and a badass staff, the Little Paris Bread Co was poised to satisfy.

Now, the Little Paris Bread Co is not only an essential stop for a rustic loaf, but one of the few local spots where you can get your hands on all-sourdough pastries. The menu is constantly rotating with an impressive selection of nostalgia-inducing staples and swoon-worthy seasonal additions. Naturally called to try one of each, I dive into a salted caramel and pear sticky bun, then a perfectly tart cherry danish. Who can resist a raspberry french toast muffin and – a childhood favourite – a massive cinnamon roll heaped with buttercream? The sourdough lends to the pastries an unmistakable tang that flirts with the sugary sweetness – together giving expression to an irresistible balance that has me chasing another bite.

I could spend hours here, Americano in hand, talking bread with April. Sourdough is so much more than its humble ingredients would suggest – flour, water, and salt. Much of its beauty is in the process, one that requires twenty four hours of patience and a heaping dose of love. Well before the sun wakes up, April starts her day: mix the dough, shape the loaves, and feed the starter (a five-year-old ferment affectionately dubbed ‘Clint Yeastwood’). Leaving the loaves to rise overnight, she bakes them the following morning. ‘Everything is done by look, by feel, and,’ she laughs, ‘by taste. That’s the best part.’ It’s clear that experience and a bit of nimbleness have played a role, too. Mindful of food waste, April gives new life to mistakes. (She recounts a particularly over-proofed batch nicknamed ‘The Blob’, which was maniacally pressed into focaccia – sparking a new favourite among her loyal customers).

I ask April what keeps her so clearly lit up aboutthe familiar rhythm that is old-world breadmaking. ‘It’s never the same twice,’ she remarks. ‘You spend all day working the loaves by hand, and when you open the fridge the next morning, you can only hope they turn out the way you wanted.’ I can’t help but agree – there is indeed a tiny joy in the mysterious vitality of fermented foods. Think about it. Beyond their pure goodness, there’s something enthralling about watching the bubbles form in your handmade beer, booch, or bread – you’re not so much making a product as you are nurturing a relationship with it.

When I leave the Little Paris Bread Co – box of pastries in my passenger seat and the sweet buzz of an afternoon espresso in my head – I wind home along the country roads, already plotting my return. 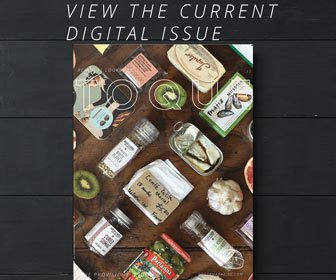 
Hard to believe sometimes that we’ve been at it

Stirring sh*t up at @compassdistillers in the Nort

This week the TOQUE team visits Halifax to check o

Pure bliss. We’re so happy to have received this

You can tell a lot about people by the things they

A couple weeks back, the TOQUE team ‘beer hopped

Almost time to get the summer kicks back on the de

Antique collectors and hunters of all things vinta

Fantastic morning in London with @danieljamesphill

Bison. At @braai_house in Stratford. #nomnom

Next up: ‘The Provisions Issue.’ Because every

It’s about that time!! It hasn’t been easy, an