Chapter One: The Ending

Having just pulled into Pfaff Subaru, acar dealership nestled amongst a small cluster of dealerships along Guelph’snorth end Woodlawn corridor, I scan the Outback’s interior. It doesn’t take me longto register evidence of the journey we’ve just experienced. The sandy carpets. Empty water containers. Crumpled gas station receipts. Crumbs. (So many crumbs.) And the trip odometer – which, in the past hour, has edged northward of twelve hundred clicks. I look behind me and note my camera gear strewn about on the caramel-coloured leather back seats. A lens here. Body there. Behind the front passenger seat I spot my irresponsibly uncapped fourteen mil rolling around on the carpeted floor. I make a mental note to take better care of my equipment, and pull the sweet Subie intoan empty spot alongside my TOQUE truck – which I’d left parked at the dealership for the duration of our trip.

I get out of the wagon, pop the rear lid with the fob, and begin transferring luggage (Patagonia duffle, Canada West boots, laptop bag, camera gear) from the Outback to my truck. While I reach way into the Subaru’s cavernous trunk for a runaway Croc, I hear a familiar voice from somewhere behindme: ‘How was the trip? Did the car serve you well?’ I turn around, Croc in hand, to find Pfaff Subaru General Manager Paul Cullen walking toward me. ‘From your Instagram,’ he adds, ‘it looks like Cai and you had a fantastic time.’ I grin. Broadly.

Where to even begin?

It’s Tuesday morning. Early August. When I turn onto TOQUE Partner Cai Sepulis’ street in Guelph’s Exhibition Park neighbourhood I see that she’s already waiting for me at the end of her driveway – loaded down with gear. Tan Filson bag. Redwing boots. A large YETI cooler stocked with a selection of colourful cans from Royal City, Elora, and Willibald breweries. A bottle of Spring Mill Distillery gin. ‘Nice car,’ she notes as I help her load up. ‘I can’t believe they gave it to us,’ I reply. ‘It’s like a WRX STI, but for adults,’ I add, alluding to my all-time favourite Subaru – a three hundred-plus horsepower brute that’s still a fave of the hooligan-ish younger set.

I summon Cai to the driver’s side. ‘Check this out,’ I exclaim enthusiastically while pointing at the gauge cluster. The odometer reads seventy-one kilometres. Total. ‘It’s brand new.’ And it’s ours for the next four days.

After making a requisite pit stop at MarketFresh in downtown Guelph for trip goodies 67 (cherries, apples, meat sticks, hummus, baby bels, chips, local ground coffee) we pull out of town and cannonball to our first destination: Taqueria El Norte in Alliston (about 40 minutes north-east of Orangeville) for lunch. This place was recommended to usby Chef Ryan Goodfellow (whom most of youknow and love as co-founder of GoodfellowsField to Fork in Rockwood) when we visitedhim some weeks ago at his current gig,Murray’s Farm & Butcher Shoppe in Hamilton.

This quaint little spot is Alliston’s best kept secret, for sure. With a pared down menu featuring tacos, tostadas, and mulitas, a beer fridge teeming with brews from Blood Brothers, Bellwoods, Left Field, and more, and a cute outdoor patio replete with garden boxes growing produce and herbs for the joint, Taqueria El Norte is an absolute must- visit for any fan of authentic Mexican street- style cuisine. After perusing the menu, we settle on tacos (pork shoulder braised in citrus with cilantro, onion and salsa verde; roast flat iron steak with guacamole, cremini mushrooms, queso fresco, aioli and pickled jalapenos; ancho braised chuck with lime crema and pickled cabbage, to name a few), pair them with Bellwoods’ Witch Shark DIPAs, find a sun-drenched spot on the patio, and dig in. Taco Tuesday has never been this good.

After lunch, we hit the road again. Our destination: a treehouse somewhere in the Haliburton Highlands where we’ll spendthe night. And along the way: quick stops at Flying Monkeys Craft Brewery in Barrie to grab some milkshake IPAs, the legendary Webers on highway eleven just outside Orillia for burgers and shakes, and Boshkung Social (a satellite of Boshkung Brewing Co) in Minden for pints on the place’s awesome patio overlooking the Gull River. A late- afternoon highlight: watching locals gather on the Social’s patio for Tuesday night bingo – hosted over radio across Haliburton County on Canoe FM.

Chapter Three: Above The Clouds

‘You have to check out this view,’ Cai beckons to me from inside the treehouse – about six hours after our blissful taco lunch. I can’t imagine it’s any better than mine, I think to myself as I peer out into the dusky forest canopy from my lovely perch on this seeming- floating structure’s balcony – built at least a couple dozen feet in the air. Soothing aromas of pine fill my senses as I stand up from my deck chair – all minimalist wood and webbing – and head indoors to see what all the fuss is about. Expecting Cai to be checking out some other idyllic forest view from one of the structure’s massive windows, I’m instead surprised to find her looking up toward the place’s second-storey loft. I join her. And look up. And see what she sees. The glorious architectural design and exquisite execution of this most fantastical place: Fort Treehouse Co, hidden away somewhere in the Highlands.

Everything about this place is perfection.The half-vaulted ceiling. Plywood-paneled walls (with perfectly uniform panel gaps). Modular gas fireplace. Portable record player (with collection of classic folk LPs). Sleek bathroom – all grey and glass with a head- to-toe window in the shower overlooking a sea of conifers. And, most incredibly, the fact that this structure really is a tree house that’s been built around, and supported by, a stout living tree. All minimal. And angular. And photogenic.

Our evening at Fort Treehouse Co unfolds as it should – with time spent relaxing on the deck above strings of twinkle lights, chilling with tallboys by a fire we build down below and, eventually, bedtime. As Cai climbs the ladder to the place’s king size bed, I sprawl out on a plush leather couch in the main room beneath a two-storey window. It doesn’t take long to fall asleep here – above the forest floor and under a moonlit sky.

The next morning, I awake to find Cai making coffee in her AeroPress. I shake off my sleep, pour a cuppa, and wander out onto the deck for this most perfect breakfast in the trees. Soon after, we’re all packed up and ready to boogie. As Cai pulls the Outback down the gravel driveway onto the back road, I catch a glimpse of the treehouse through the forest. I pull out my phone, open Spotify, and search for Gang Starr’s classic, ‘Above The Clouds’ – a most perfect anthem to celebrate what’s been a most splendid stay.

‘There’s world-record muskies in this partof the river,’ our host, Terry, yells over the sound of splashing waves and the Yamaha outboard motor as we cross the upper French River from Jimmy’s Marina (part of the Dokis First Nation reserve and community) to our destination: The Tilted Toque Wilderness Lodge. ‘If you want to do some muskie fishing later,’ he adds, ‘just let me know.’ I steal a glance at Cai. I’ve never fished before,and don’t really feel the need to start nowtrying to catch (and release) sixty-inch river monsters. And yet, I think to myself, when in Rome.

Fast forward a few hours and Cai and I are back from my first fishing excursion. And while neither of us caught anything (I crossed my fingers hoping I wouldn’t, as I was deathly afraid of what to do if there was ever a tug on my line), I loved the experience. And I absolutely love The Tilted Toque. Located on the smooth rocky shoreline of the French River, it’s home to a handful of fully-furnished cabins, a fantastic lodge (with walls lined with taxidermied fish and game), fish cleaning hut, long main deck extending into the glorious French River, and amazing staff. Cai and I spend the afternoon seated at the end of the deck on brightly-painted Muskoka chairs, watching a family from Fergus, of all places, fish from off the end of the long wooden structure. I crack a Willibald ‘Three Hands’ 74 Double IPA, take a sip, and mutter to myself:

‘I could live here forever.’ Cai, overhearing my muttering, replies with a chuckle: ‘And you don’t even fish.’

Once the sun sets, Cai and I relax on the deck of our cabin. In front of us, about twenty yards away, just next to the French, lodge patrons chat and laugh the night away around a bonfire. We eventually head inside and curl up to sleep in our respective beds. A cool breeze comes off the river and in through our open windows. It’s perfect. This place is just perfect. I drift off to sleep in mere minutes – with dreams of Subaru Outbacks, record-setting muskies, and treehouses dancing companionably in my head.

Chapter Five: A Taste of Home at Killbear Marina

‘This smoked salmon is awesome,’ Cai remarks as she slices herself another bit. After surveying her morsel to make sure she’s topped it with crispy batter bits, three-chili cream, cumin salt, pickled onions, and a splash of lime, she pops it in her mouth. It’s our last full day of this adventure, and Cai and I have just met up with close friend Michael Oosterveld (owner of Guelph’s Fixed Gear Brewing) and Cai’s wife, Sonia, for lunch at Fat Sparrow at Killbear – a restaurant just opened at Killbear Marina by pal (and Waterloo Region celebrity chef) Nick Benninger. While Sonia’s driven up from Guelph, Michael’s boated in from his cottage in the archipelago off the east coast of Georgian Bay.

Seated on the restaurant’s second-storey patio, we’re entranced by the wonderful views of the marina below. And even more so, the food. Our dishes hit the spot: Chicken Sammy (fried chicken, garlic dill aioli, picked onion), Fish and Chips (Trestle Brewing IPA-battered seasonal fish, fries, slaw, tartar), Crispy Fish Tacos (with guac, pickled jalapenos, fresh herbs, slaw, and three-chili sour cream), and the aforementioned Cold Smoked Salmon. Each bite a treat, paired with a few Fixed Gear tall cans. Afterwards we load onto Michael’s boat, and cruise out to his private island in the archipelago for our last night.

Cruising down the four hundred on my way back home, I’m feeling refreshed. Rejuvenated. Ready to tackle this world and all its insanity. With Michael back at his cottage (after having dropped us off at the marina) and Cai and Sonia driving the TOQUE Rav home, I’m alone in this Outback. I scan the interior and mentally catalogue palpable evidence of the journey we’ve just experienced. Each item offers me a story about getting away.

I turn off the cruise control, crack the sunroof, and push the pedal of this adventure wagon closer to the floor.It may not be a WRX STI, I think to myself, but I can still be a bit of a hooligan. A free spirit. Outbacking across Ontario. 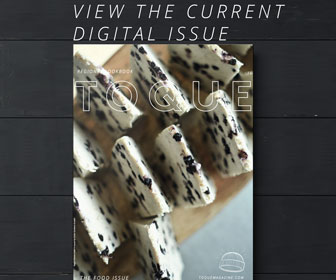 Portrait of a brewer. Killin’ it, as usual.

Great shoot this morning at @sharp_knifeshop – can

Did you know that an entrepreneur in Hamilton’s

Today we had the incredible pleasure of spending t

While ‘The Food Issue’ may be out of stock now